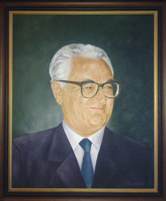 Dr. Vicente was the first Ecuadorian member of the USTA now INTA, and was a member of the Institute of Trademark Agents in London since 1955 and the Federation Internationalle des Conseils en Propriété Industrielle, Switzerland.

His prestigious practice lead him to serve the government as:

He was always involved in the academic environment: