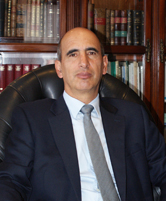 With over 30 years of experience in IP, he is the head of our firm. His main practice is focused in all matters related to Intellectual Property and Corporate Practice. Rodrigo has represented many of the Global 500 companies in the prosecution of their patents and trademarks, as well as in the exploitation of their IP rights through franchising, licensing, distribution agreements, or by incorporating local branches or acquiring companies.

Rodrigo handles complex IP litigation, and is often dealing with high profile cases. In Ecuador’s largest IP case he was counsel for British American Tobacco against Philip Morris in the dispute for trademark Belmont. This case not only involved trademark issues such as the local ownership of the mark but also addressed issues such as free trade in the Andean Community, and required lobbying, legal reforms, and media.

Secretary and Member of the Board of Directors of several multinational companies.

"Holds the reins and gives the group strong leadership"