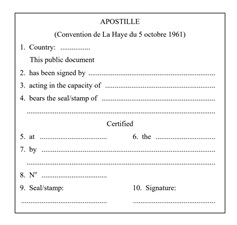 BOLIVIA: Entry to the Hague Apostille Convention, Trademark Prosecution, and Regional Evidence of Use in Cancellation Proceedings

In September 2017, Bolivia signed the Hague Apostille Convention, which entered into force on May 7, 2018. Presidential Decree No. 3541, which was passed on April 25, 2018, sets out the regulations for its application. Article 11 of the decree states that “foreign documents that are legalized with Apostille [. . .] will have full effects within Bolivia.” This will allow trademark owners to more easily prosecute trademark applications and provides an easier approach to defending trademarks from cancellation by demonstrating use in member states belonging to the Andean Community of Nations, as the legalization procedure will be simplified and considerably less expensive.

Foreign intellectual property (IP) owners were previously burdened with visiting a Bolivian Consulate to obtain legalizations of powers of attorney and other documents to be used in Bolivia in connection with trademark prosecution. This process resulted in very high, and in some cases even prohibitive, official fees for validation of documents. In addition to the costs, the time period for legalizations was often long, causing trademark owners to miss deadlines. Many IP owners in Bolivia lost application fees, priorities, opposition rights, and even the right to defend against cancellation actions.

Regarding cancellation actions, the Andean Law under Decision 486, Article 165, provides that:

The competent national office shall cancel the registration of a trademark at the request of any interested party when, without justification, the trademark has not been used in at least one of the member countries, by the owner or his licensee or any other person authorized for such purpose during the three consecutive years preceding the date on which the cancellation action was initiated. . . .

The option to file evidence of use from Colombia, Ecuador, or Peru is particularly useful to brand owners because they may not have entered smaller markets, such as Bolivia, but do have trade and business in the Andean Community. Filing evidence from other member states was extremely complicated previously, due to the strict Bolivian rules regarding evidence and validity of foreign documents. Any document which was going to be used to defend a cancellation action had to be legalized by the Bolivian Consulate in the country of origin and again legalized in Bolivia to be considered valid before the National Intellectual Property Service.

In everyday practice, some practitioners had started using cancellation actions to clear the path to otherwise unobtainable registrations, knowing that the requirements for documents to actually prove use were so complicated that the odds were always in favor of canceling the trademark.

We expect that the Apostille Convention will put Bolivia on the radar of IP owners seeking protection, now that properly policing and defending their marks has become more straightforward.

Although every effort has been made to verify the accuracy of items in the INTA Bulletin, readers are urged to check independently on matters of specific concern or interest. Law & Practice updates are published without comment from INTA except where it has taken an official position.