Bermeo successfully represented its client Manchester United Limited, in opposition proceedings against an infringing application for the registration of trademark # WE ARE UNITED EC.

#Hashtags as trademarks have been arising uncertainty worldwide. Like other trademarks, a hashtag can be registered as a trademark only if it fulfills all the requirements arising from relevant trademark legislation. Hashtags in general are usually generic and simple and therefore might not be capable to identify the source of the applicant’s goods or services.

Manchester United is a company not only operating one of the Premier League’s top soccer teams but also marketing and selling sports apparel and clothing globally under its brand. Man United has been diligently protecting its trademarks in Ecuador, home country of its team captain Antonio Valencia. 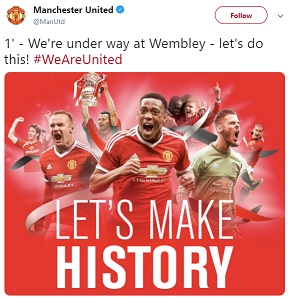 In this case, the applicant filed trademark #WEAREUNITEDEC to protect a series of sporting and cultural activities in class 41 and clothing in class 25. One of Man United’s famous hashtags is #WEAREUNITED used for several marketing campaigns and broadly used by the team’s fans on social media.

Two oppositions were filed based on earlier MANCHESTER UNITED trademarks protecting the same products and services. These trademarks and hashtag are well known in Ecuador mostly because of soccer team’s Ecuadorian football player Antonio Valencia, who is also captain of the national football team.

When deciding the oppositions, the IP Office considered that “due to the conceptual, phonetical and visual similarity of the applied and earlier marks, there is a likelihood of confusion among consumers, and therefore a risk that the public might believe that products come from the same company or from economically-linked companies.” They also mentioned that the registered mark is partially reproduced in the new applications and cited a precedent by the Andean Court that states: “There is an automatic indirect risk of confusion when there is a partial reproduction of a mark, without addition of any distinctive element.” (21-IP-1998)

Finally, they considered that the goods and services are also related so the IP Office granted the oppositions and rejected the applications on March 28 and December 18, 2018. Unfortunately, even though vast evidence was filed to prove the well-known status of the marks and the hashtags, the IP Office did not make any mention to the protection of hashtags or the fame of the marks.