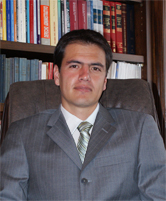 Rodrigo formally joined our firm in 2005. He obtained his LLM in Boston University and is also admitted to practice in the State of New York. Before re-joining us in 2010, he worked at a top tier law firm in Washington, DC.

In Ecuador, Rodrigo handles oppositions and trademark litigation and clients seek him for complex matters that require thorough and creative strategies.

Rodrigo also assists our clients in the commercial aspects of licensing or franchising, reviews international contracts for Ecuadorian law compliance, and counsels in matters relating taxation, and tax planning.

- Contributor to the Trademark Working Group for its submissions to the U.S. Trade Representative, Direction for Innovation and Intellectual Property

"Highlighted by sources for his activity in the IP sector. His practice centres on trade mark prosecution and opposition."
-Chambers LA, 2019

Emerging name in the market "Exemplary service," and "high level of responsiveness"
- Chambers, 2015